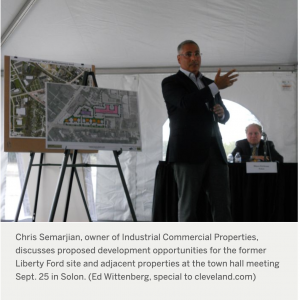 SOLON, Ohio — Mayor Ed Kraus believes the rezoning of the former Liberty Ford site and adjacent properties could have a huge positive impact on the city.

“We’re really excited,” Kraus told a crowd of more than 100 people at a town hall meeting to discuss the proposed rezoning on Wednesday (Sept. 25) in the former Liberty Ford parking lot on Aurora Road, near Solon Road.

“Instead of having these ugly, blighted areas in the middle of Solon, it’s time that we change that,” Kraus said.

On Nov. 5, Solon voters will decide whether they want the land to be rezoned for mixed-use development — which could include restaurants, retail, apartments and office space — or keep it zoned as is. The current C-4 zoning is limited to uses such as hotels, car sales and dealerships, auto repair centers and gas stations.

“It’s Solon’s time,” Kraus said. “Everyone else has done it. Look at Van Aken (in Shaker Heights). Look at Pinecrest (in Orange). It’s crazy to think that every other community gets it right except us.

“The C-4 zoning that we have in place here is an antiquated zoning. We need to change it to the modern world and bring Solon from what looks like the 1950s to the real world, and that’s what we’re trying to do.”

Others who shared information and answered questions about Issue 65 included Rob Frankland, the city’s director of planning; Chris Semarjian, owner of Solon-based Industrial Commercial Properties, which has a purchase agreement on the six-acre former Liberty Ford property and would be the developer of the project; Chris Salata, chief operating officer of ICP; and Bill Kern, executive vice president of ICP. Click to read entire article.