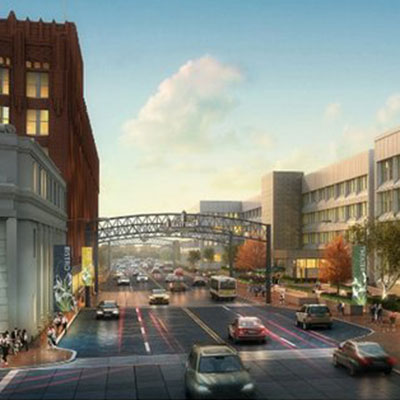 Soon after ICP acquired the Goodyear Tire and Rubber Company campus, Phase I construction began on the new, 642,000-square-foot Goodyear World Headquarters and was completed in 2013. The new headquarters includes a parking structure, as well the revitalization of certain other buildings on Goodyear Tire and Rubber Company’s campus. The Phase I construction, financed in part by EB-5 funding, created significant job opportunities in the region.

Phase II of the redevelopment includes the original 1.4 million-square-foot Goodyear Headquarters and Goodyear Hall, reimagined as a live, work, play environment known as “The East End.” Several Large institutional and public government-type users have occupied office space in The East End, and it will be the future world headquarters of Babcox & Wilcox.

The combination of a hotel, office, medical, retail, restaurants and 106 loft apartments creates a dynamic synergy on the property. The area running along East Market Street has been transformed into a pedestrian-friendly entertainment district, reflecting extensive streetscape improvements and the renovation of Goodyear Theater, a 1,400-seat entertainment destination, adjoined by Goodyear Hall Gymnasium, a center for national, regional and local events. In April 2019, Akron city council approved a resolution for the creation of an entertainment district over 80 acres of The East End, which will help facilitate the live, work, play atmosphere.