In conjunction with our Development Partners at IRG, we begin the third phase of redevelopment at the former Goodyear HQ complex called the East End. 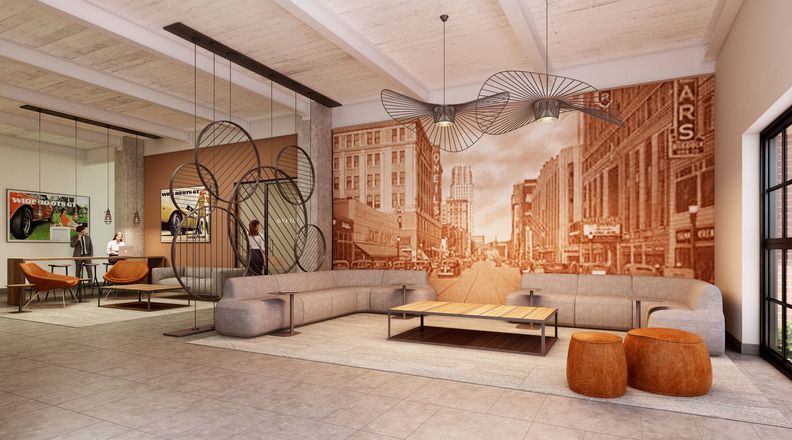 Industrial Realty Group is starting with its third phase of redevelopment at the former Goodyear headquarters complex. The project calls for 66 luxury apartments. This rendering shows the building’s lobby.

Akron is getting some more luxury apartments on its near east side.

Industrial Realty Group has begun construction of more than 60 new units at its East End development on East Market Street.

The units will cost about $20 million to build out and will lease for more than IRG’s existing East End apartments across the street, where Goodyear Hall was formerly located, IRG senior development manager Michele Kiernan said. The new residences represent the third phase of IRG’s development of the former Goodyear headquarters complex.

“We are building what we’re calling The Lofts at the East End. It’s 66 units. Fifty-six are one bedroom, and 10 are two bedrooms. They sit on the fifth, sixth and seventh floors” of Goodyear’s former headquarters, Kiernan said.

Construction began in September, and should be done by the end of spring 2021. Tenants are expected to begin moving in beginning in June or July, she added.

Cleveland’s Dimit Architects did the design work, while Medina’s Pride One is the project’s general contractor, Kiernan said.

Kiernan and IRG president and founder Stu Lichter said the units have been planned for some time and the success of the 105 apartments the company already has developed in the East End convinced IRG that now was the time to build further.

“Our apartments have done really well there, so we decided to move forward with The Lofts. They’ll be a little more expensive than the apartments across the street,” Kiernan said.

IRG plans to lease the new apartments for about $1.80 to $1.95 per square foot. That’s more than the roughly $1.50 per square foot that tenants of existing units across the street pay, but in line with the prices for other big new projects, including the Bowery District on South Main Street downtown, Kiernan said.

The Bowery has so far reported it’s had no problems signing residential tenants, and East End’s experience has been the same.

Along with those higher prices will come more amenities. Many of the new units will have their own private balconies, and the building will include things like golf simulators and fitness rooms, Kiernan said.

“Including site improvements, because we’re investing in a parking lot, too, at the end of the day we’re probably at $20 million when we’re all in. It’s a huge number relative to the number of units … but there’s a lot of demolition, original floors that we’re ripping up and we’re putting in all new mechanical systems,” Kiernan said.

It’s not as if there’s no room for the new units — the entire East End development entails more than 400 acres, and IRG has about 1.4 million square feet on the south side of the street where the new development is taking shape.

The East End development already has attracted some big companies, such as the engineering and industrial firm Babcock & Wilcox and the accounting giant Ernst and Young, both of which moved in last year and brought hundreds of jobs to the site.

The city couldn’t be more pleased with how the entire site is progressing, said Akron planning director Jason Segedy.

The expansion of the project’s residential component helps build up the East End as a neighborhood by giving it the critical mass it needs to support things like restaurants, coffee shops and retailers. It also fits perfectly with the city’s goal of rebuilding Akron’s population, Segedy said.

“It’s exciting. We were aware of the apartments going in on that side, and I think it’s very healthy,” Segedy said. “There’s so much space over there, and having residential on both sides of the street will add some real vibrancy to that neighborhood. It’s good for their development to have the apartments keep coming in and having more people there in general works great with our strategy of rebuilding the population.”

But for Segedy at least the project represents even more than new jobs, new residents or even new tax revenue for the city. It’s also preserving historic industrial sites that were once seen as lost causes and had become little more than nuisances. Click to read the entire article.