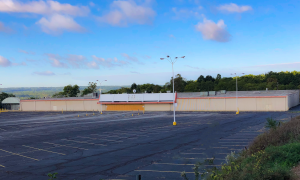 The empty Kmart store at 12501 Rockside Road in Garfield Heights has gained a new owner and may gain a new use after an affiliate of Industrial Commercial Properties of Solon acquired it for $1.4 million on Friday, Nov. 22, according to Cuyahoga County land records.

Chris Semarjian, ICP’s owner, said in a news release on Tuesday, Nov. 26, that he was attracted to the property by its proximity to the I-480 corridor and the fact that its design lends itself to assembly and warehouse space if not continued use as retail space.

All that’s certain so far is that the company will update the 1977-vintage building, especially its exterior.

The struggling retailer announced in 2017 it planned to shut the store. The one-time Big Kmart has 85,600 square feet of selling space and sits on 9 acres. Cuyahoga County assigned it a market value of $2 million and ascribed most of the value, or $1.1 million, to the land and almost $881,000 to the structure.

Although ICP is best known for buying and redeveloping former industrial buildings for multiple-tenant use, it may put in new retailers if they are in the market for the location. For example, earlier this year. ICP leased a former Kmart it owns in Streetsboro to Muskegon, Mich.-based Family Home and Farm for one of its stores.

Garfield Heights Mayor Vic Collova said in a phone interview that he is pleased by ICP’s plan to find a user for the site that may bring jobs to the city.

“I’m excited about what ICP brings to the table in Garfield Heights,” Collova said. “The other two prospective buyers were looking at it for indoor storage, which would not create many jobs in the city.”

The seller of the property was Bross Brothers, a California-based real estate group. Link to article.