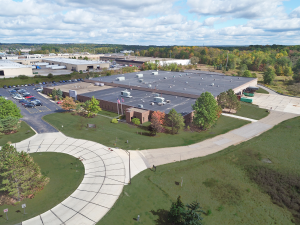 A Solon multitenant office/warehouse building at 30500 Bruce Industrial Parkway is back in local hands after Industrial Commercial Properties acquired it from an affiliate of SFF Realty Fund LLC, a San Francisco-based investment fund, for $3.2 million.

The 155,000-square-foot building, large enough to contain almost three football fields, is vacant, according to realty data provider CoStar Inc. In a separate transaction, also on July 17, ICP paid $390,000 for a 4-acre parcel of empty industrial land that the seller of the building had held separately.

Angee Shaker, Solon economic development director, said in an email that the city is excited that ICP, which is based in Solon, has acquired its fifth building in the suburb because the firm maintains its properties well and markets them effectively.

Prior to the acquisition, the Cuyahoga County Auditor’s office assigned the building a market value of $7.3 million and the empty parcel a value of $273,000. ICP holds the properties through Solon Bruce Industrial LLC.

Chris Semarjian, ICP owner, said in a Monday, July 27, interview that he believes the building has been an “underappreciated piece of industrial real estate.”

ICP plans to cover the building with a new surface to give it a more contemporary look and demolish “a fair amount” of the 60,000 square feet of office space to make more space available for new industrial use.

“We’ll give it the look of a surgery center,” Semarjian said, “because that is the type of look and feel we believe that industrial users want today, especially in Solon.” Click to read the entire article.