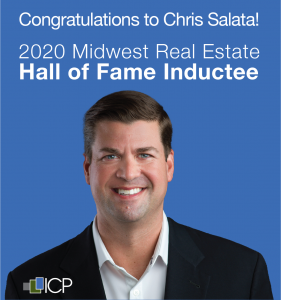 How much of an impact has Chris Salata had on Industrial Commercial Properties, the company he serves as chief operating officer? During the last three years, he’s led the company to the acquisition of 46 new assets totaling 10 million square feet and 820 acres of developable land. And last year? Salata was the lead project executive on the repurposing of several blighted, yet high-profile, locations in Northeast Ohio. In Garfield Heights, Ohio, he led ICP’s redevelopment efforts on City View Center, a long-vacant 550,000-square-foot shopping center. “I credit a lot of my success to my relationships, treating people with respect and working smart,” Salata said. “I have been blessed to work with some of the most talented people in commercial real estate, and I make it a point to surround myself with people whom I can learn from every day.” During his tenure as chief operating officer at ICP, the company’s portfolio has grown more than 70 percent, with a value eclipsing $1.5 billion. ICP’s portfolio of privately held industrial and commercial office buildings now includes more than 150 properties totaling 42 million square feet and more than 300 tenants. Salata also spearheaded the company’s efforts on the redevelopment of land that was the former home of Geauga Lake Amusement Park and Sea World in Bainbridge Township and Aurora. With ICP taking on the role of master developer, Salata coordinated the creation of a Joint Economic Development District and worked to rezone the property for mixed-use development. Before moving to ICP, Salata served as senior vice president of development at DDR Corp, where he oversaw national development and redevelopment initiatives for the publicly traded REIT. He also served as principal at Fairmount Properties. During his time there, he took on the lead role in the development of Pinecrest, a $240 million mixed-use development in Orange Village, Ohio. When Salata’s not working at ICP? He says he prefers to spend his time watching live music (preferably country), cheering on his beloved Fighting Irish, Browns, Cavs and Indians and coaching any sport, especially ones that his 4 kids are playing. Read about it here