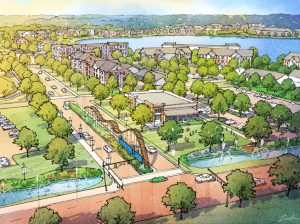 For more than 100 years, the land surrounding Geauga Lake – once known as Picnic Lake and Giles Pond – was a haven for picnickers and thrill seekers, not to mention those who enjoyed marine animals and attractions for about three decades.

In their heyday, Geauga Lake Park and Sea World of Ohio each drew a million people to the shores of Geauga Lake. Then a few years after the turn of the 21st century, it all came to an end. The sea creatures, amusement rides, water attractions and buildings vanished.

Now, the land is on its way to a new life as the Geauga Lake District, a mixed-use development in which its new owners hope to include lakeside shops, restaurants, institutions, offices and homes, while incorporating the history of the site into the landscape.

“The board knows the property will never be the same, but is aware of the tens of thousands of people who celebrate the history and keep the memories of Geauga Lake and Sea World alive on social media,” Bainbridge Township trustees said last fall.

Trustees and officials from Industrial Commercial Properties, which acquired 377 acres around the lake, outlined plans for the site at a recent public meeting. Trustee Jeff Markley said tree clearing is under way on the property. 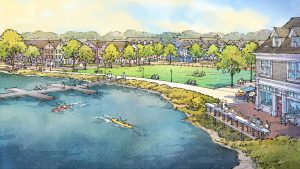 This rendering of the proposed Geauga Lake District shows Route 43 at the bottom, with the new Geauga Lake Boulevard and a replica of a roller coaster in the center.
“From now on, passersby will see constant activity at the site,” Markley said. “We hope this redevelopment will be a benefit to all and something the community will be proud of. The trustees will communicate with residents as best we can as the project progresses.”

ICP is actively marketing the site to retailers, restaurants, residential and other commercial users.

The first company to be part of the Geauga Lake District is Menards, a national home improvement chain, which will occupy 24 acres of the former parking lot along Route 43 on the northwest side of the lake. It plans to open about a 200,000-square-foot complex early in 2022.

“A lot of work has gone into the redevelopment process over the last few years,” added Bainbridge Trustee Kristina O’Brien. “We want to make this a destination spot and bring back the history of Geauga Lake Park, but this process will take time.”

As activity on the north side of the lake gets under way, Pulte Homes of Ohio in the last few months has began to transform the former Sea World parking lot and a campground on the north side of Treat Road and east side of Squires Road in Aurora into 306 homes called Renaissance Park at Geauga Lake.

Your stories live here.
Fuel your hometown passion and plug into the stories that define it.
Create Account
ICP acquired the property from Cedar Fair last fall for an undisclosed price. Markley said some issues still need to be worked out in Geauga County Common Pleas Court after ICP challenged the rejection of zoning variances by Bainbridge’s board of zoning appeals.

He explained the variances sought were to allow development of a big box store and to permit a multi-story residential building with no commercial or retail uses on the first floor. The variance issues have been resolved in a court judgment entry.

Markley said the legal action was never confrontational and was necessary because the BZA did not want to approve large variances which would have made it possible to build the Menards.

Meanwhile, Markley explained the township has approved a Tax Increment Financing agreement for the Geauga Lake District, which will be used as a subsidy for redevelopment, infrastructure and other community improvement projects.

And the township and Aurora have OK’d a Joint Economic Development District agreement, which allows the two to share income tax from employees working in the district and Aurora to provide water and sewer utilities to the property.

The JEDD will allow division of proceeds from Aurora’s 2 percent income tax as follows: 25 percent each to the city’s and township’s general funds, 25 percent to fund Aurora utilities’ operations and 25 percent to the JEDD board to handle needs of the district.

Last fall, ICP owner Chris Semarjian said the firm wants to re-ignite the iconic property. “It will not only create a fully functioning district where people can live, work, dine and recreate, but it will have a broader impact on the region’s economic development and job creation,” he said. READ THE ENTIRE ARTICLE