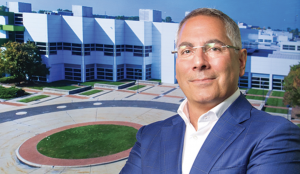 “If we can’t see the opportunity in five minutes, we move on,” says Semarjian, owner of Industrial Commercial Properties LLC. “It’s that quick. I mean, when you’ve done it enough, you just know. We see things that a lot of people can’t see, and we take what from the outside may look like a significant risk that most real estate investors wouldn’t take.”

ICP has been in the industrial real estate sector since Semarjian began acquiring properties in 1996. The company is responsible for the operation of more than 42 million square feet of property throughout the Midwest, serving 300 tenants on more than 100 properties.

“We’re doing 10 to 12 new projects a year, but we’re only 65 percent occupied in our whole portfolio,” Semarjian says. “Out of our 42 million square feet that we currently own, only a portion of that is occupied. So we have a lot of lease opportunity within our own portfolio, and we’re always making new acquisitions.”

Semarjian is an entrepreneur, a developer and a dealmaker. But most of all, he likes to be viewed as a problem solver.

“I like to understand what drives people, and once you understand that, you try to inject a little bit of market reality,” he says. “We can sit down with people and say, ‘Hey, I hear where you’re coming from. Here’s where the market is today. Here’s what it’s going to take to bridge that gap. Are you interested?’”

Know what you do well

ICP has largely built its portfolio across Ohio and Michigan, but it also has a presence in Pennsylvania and Florida.

Northeast Ohio has seen a number of high-profile projects take shape. In Brooklyn, the 1.4 million-square-foot complex once home to American Greetings is being rejuvenated with seven new leases, and by 2020, it’s expected that more than 2,000 jobs will be brought to the campus. In North Randall, ICP is leading a remake of the vacant Randall Park Mall property. It acquired the land in 2014 and began clearing the site for new development, which now houses a 900,000-square-foot, $177 million, Amazon fulfillment center that has created more than 2,500 new jobs for the area.

In August, ICP bought the vacant Dillard’s building at Midway Mall in Elyria, which follows its acquisition last spring of the Sears building.

“That’s a little longer-term play for us,” Semarjian says. “You have a fairly strong investment group that owns the interior mall portion and the Penney’s building. It’s not real clear what they want to do yet. They just lost Penney’s, so I think that’ll maybe work its way out in the near future.”

He says when there’s income at a property, things tend to drift.

“At the old Euclid Square Mall, Dillard’s had an outlet there for a long time and kept that thing limping along for probably 10 to 12 years. But once they lose that revenue source, it brings about a different view on things.”

Semarjian is captivated by the location of the Midway Mall property on State Route 57 between Interstates 80 and 90.

“That’s the tightest connection point between two east-west major highways, and we have probably two-thirds of the developable frontage on Route 57,” Semarjian says. “I love the building, but I bought it for the site. Where the heck can you get that much frontage on a major state route between two huge highways? So that’s our play.”

When Semarjian considers acquisition strategy, he focuses on projects that can be completed within a three- to five-year timeframe.

“Our basic business is not long-term development,” he says. “It’s turnaround development. We outsource all of our property management, so we’re not bogged down with the daily cut the grass, plow the snow and manage a bunch of accountants to collect the rent. We’re in the buy, plan, lease and construct mode.”

One of the biggest trends in commercial real estate is property owners who want to reduce their footprint. Technology and flexible working arrangements are just two factors that allow companies to function with less space than they’ve typically needed. It’s a need that creates big opportunities for Semarjian to put his problem-solving skills to work.

“There are a lot of deals sitting on the sidelines today because somebody doesn’t know what to do with what will become their vacant or surplus real estate,” Semarjian says. “They really need a new location, but they can’t afford both properties. So there are a lot of companies floating around in their buildings and not using all their space. They might be in a 500,000-square-foot building or 1 million-square-foot building and effectively using 50 percent of their footprint.”

Companies in this situation that don’t want the cost and disruption of relocating can do what’s known in real estate circles as a sale and partial leaseback.

“We’ll go in and write them a check for their building, put in the capital to get them effective on the side,” Semarjian says. “We’ll get them operational and functioning in their facility and then put the capital in to bring in another tenant or two. We did that with Lockheed Martin Corp. and with American Greetings. It doesn’t cost more, it saves them money and it gives them a check. Yet, the building doesn’t sit around and get neglected. It’s all problem solving, but it’s a great business model.”

It all begins with the simple act of listening, Semarjian says. Talk to potential clients and learn their issues.

“Is it that you’re in multiple facilities and need to get under one roof?” he says. “Is it that you’re paying too much in rent somewhere and don’t need that level of facility? Is it that you need to sell your building and get cash so you can put it into your business and focus on buying plant equipment and hiring people, versus just being in a static real estate transaction? Listening is very important.”

The key for ICP, Semarjian says, is the company’s willingness to be creative in its solutions and not stick to a tried-and-true template to get a job done.

“We’re not an institution with this box where everything is defined and has to go in it perfectly,” he says. “Our scenarios, although it might look like there are a lot of large industrial facilities in our portfolio, they’ve been acquired in a lot of different ways with different reasons and strategies. Being creative and not saying no, but listening to the problems — whether it’s a tenant or a seller, and trying to solve those problems — I think that really gives us a leg up.”

Semarjian strives to gain a deeper understanding of what his clients need. He doesn’t claim to be an expert on their industry, but he doesn’t have to be in order to provide a better solution to their problem.

“We actually are very into your process,” Semarjian says. “We spend a lot of time upfront with that tenant, probably four or five meetings. We don’t want them to come into one of our properties and be hamstrung on their production flow. We spend a lot of time on the engineering side, which candidly, we don’t see that much in our market. Most people just have space available, and they want to rent it to you, and it’s you, Mr. User, that is going to have to figure out how to operate it.” Click to read the rest of the article