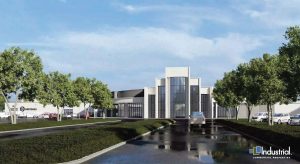 Akron’s Chapel Hill Mall hasn’t been this busy since Archie the Snowman and the once-popular shopping destination’s famous carousel brought in thousands of families each holiday season decades ago.

Except now the place — renamed Chapel Hill Business Park by its owner, Solon’s Industrial Commercial Properties group — is busy with shipping rather than shopping. And it’s shipping goods produced right there by a growing number of manufacturing tenants.

Activity at the park is soon to pick up even further, as ICP said it has landed another big light-industrial tenant for Chapel Hill.

That new tenant is Akron’s Driverge Vehicle Innovations, which manufactures wheelchair-accessible vans for its parent company in Richfield, MobilityWorks — a national dealer of vehicles made by Driverge and other manufacturers.

Driverge has signed up to take just less than 153,000 square feet in the 642,000-square-foot business park on Akron’s Brittain Road, said both ICP and Driverge. 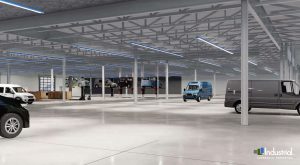 Driverge president Mark Minatel said his company hopes to begin operations at the former mall around June 1 and will move all of its 120 Akron employees into the new space, which also will house its headquarters.

“It will be our entire Driverge team,” Minatel said. “We are going to take the entire 150,000 square feet all at once.”

Minatel said his company wanted to stay in town and was attracted to the business park’s Akron location; its clean and open space that’s well-suited to manufacturing; and its easy access to interstate shipping routes via State Route 8. Driverge also especially likes the location’s parking. Driverge sometimes has as many as 800 vehicles that come to it as stock vehicles, made by Ford, Dodge and Mercedes-Benz, before the company completes their conversions, Minatel said — and Chapel Hill’s 60 acres of parking can hold that many and more.

He’s also doing it for his current employees, who he said deserve a newer and consolidated space, as well as for the future employees he hopes to attract, Minatel said. The company’s Akron employees are currently spread out over four buildings on the southeast side of town around the intersection of Kenmore Boulevard and West Wilbeth Road, where Driverge grew up and into the area’s available space, Minatel said.

Driverge is still growing and will have more space at Chapel Hill than it does in its current buildings combined.

The company is already planning to add more people to fill up that space and increase its capacity, as well.

“We are hiring,” Minatel said. “We’re going to be looking immediately to add between 20 and 25 positions. Seventeen of those are manufacturing positions and three will be professional, engineers.” 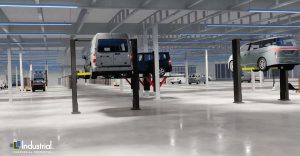 That leaves 272,000 square feet of the former mall left to lease and build out for future tenants, and Salata said he already has deals in the works for a good chunk of that space.

Driverge has already told ICP it may need another 18,000 square feet of space, Salata said, with at least one more major tenant already close to taking more space.

“We’re in conversations with another tenant for another 85,000 square feet,” Salata said. “I can’t tell you who it is just yet, but we’re pretty far along in those discussions as well.”

ICP had high hopes for the mall when it purchased it from the city of Akron for $7 million last year, especially when the city changed the zoning for the structure to allow light manufacturing operations to move in. But even those hopes have been surpassed by the amount of space ICP has been able to build out and fill in less than a year, Salata said, noting that his company already is doing demolition in the rest of Chapel Hill in anticipation of more tenants.

Rents are good, for the market, he said, with spaces leased so far at prices between $3.50 and $5 per square foot.

Chapel Hill is the fifth mall that ICP has purchased — it’s currently working to redevelop the 750,000 square-foot Midway Mall in Elyria — and its success has bolstered its confidence and made it want to buy more, and even to possibly expand Chapel Hill with new construction, Salata said. Click to read the entire article.